The final international break of the year is almost over so I thought I’d take a look back at the  basic statistics and key performance indicators from GW1-12 that I tend to use when creating the watchlist and making transfers. Yesterday was the goalkeepers, so today it’s on to the defenders. 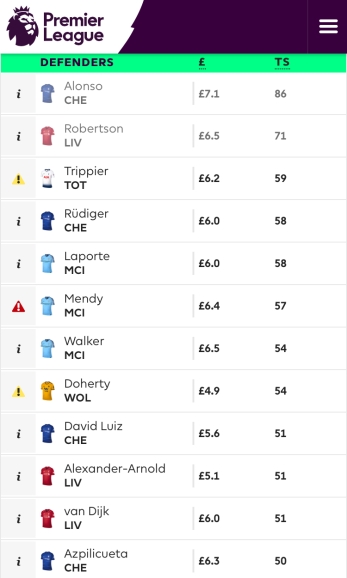 Shots In the Box:

As with the goalkeepers, it’s the same names that are cropping up time and time again throughout the various categories. It’s not particularly difficult to see why the likes of Alonso and Robertson top the defender charts, and it’s pretty easy for me to say they are practically a must own at this point.………because these two are absolutely must own as far as I’m concerned, and here’s why.

Defenders are all too often seen as the less glamorous position in the game, and over the years I’ve seen them relatively ignored. Filling the entire defence with £4.5-5.0m options used to be template, and something I’ve regularly been guilty of as I took up the never-ending pursuit of landing the most explosive attacking players in the game. However, like it not, the game has changed both on the field, and for FPL.

Yes, Alonso and Robertson come with very premium price tags for a defender. And yes, there will always be the obvious argument that the money could be better used elsewhere (as it was in seasons past). But, ignoring their classification as defenders for a moment, why would you not want to own two of the highest scoring players in the game? Surely that is the whole point of the entire game, no? In fact, Alonso is currently THE highest scoring player for only £7.1m, whereas Robertson can be bettered by only a handful of players, none of which come in cheaper than his £6.5m price tag. If you’re looking for value, then there it is plain as day!

As for the stats themselves, I must say that my opinion has changed dramatically in terms of defenders in recent years. It might be an unpopular point of view, but I don’t actually think they mean too much. As Fantasy managers, we can often try to be too clever, over complicating things by constantly searching for value via that extra attacking potential, and often ignoring the obvious – the clean sheets.

In fact, it’s happening now with those searching for a Mendy replacement. Twitter is currently full of people arguing in favour of defenders like Everton’s Digne because he’s “only £4.8m” and “creates so many chances” for a defender. However, the reality is that Digne has only registered 1 assist from all those chances, and Everton have only kept 3 clean sheets in the 12 games so far. Over 38 games that might amount to 3 assists and 9 clean sheets; a decent return which seems fairly reasonable given Everton managed 10 last year.

However, when you compare that to the other main contender in Laporte (who hardly features in the stats above), the difference is obvious. He has 1 goal to his name, has established himself as the first choice centre-back within the best team/defence in the league, and City are well on their way to matching last year’s total of 18 clean sheets having registered 7 already. Ignoring any other potential attacking returns, that will equate to nearly double the points of Digne, while providing a level of points equivalent to that of a 15+ goal a season striker. So for just over a £1m more in price, I know who I would rather have.

Again, I know the usual arguments will rear up in that Digne is cheap enough to rotate in and out, but chances are that the other players he’s rotating with will be of a similar mould. Of course this could just be the Sky Player in me trying desperately to conserve transfers, and I accept that there are many ways to play game. But, instead of wasting time and effort chasing the next cheap “potential” for points as indicated by the stats, why not just plug in the likes of Alonso, Robertson and Laporte for the rest of the season and call it a job well done!

All stats are per the Official FPL and Sky FF websites